The Egyptian delegation of Muslim sheikhs settled in for the opening session of the interfaith conference. Their mainline Protestant hosts welcomed them to the hallowed halls of a historic New York seminary with pleasantries and platitudes about shared humanity and common values.

Then the moderator startled the senior scholars from Al-Azhar University, the foremost center of learning in the Sunni Muslim world, with what sounded like an ultimatum: “Anyone who believes their religion is the only way is not welcome here.”

This article was first published in the July/August print edition of Christianity Today. Please click here to read the full article.

One hour later at work, and Sarah Chetti might have been one of thousands in a Beirut hospital.

Director of the INSAAF migrant worker ministry in Lebanon, Chetti’s colleagues described shards of broken glass flying through the air, and the metal frames of doors ripped from their hinges.

It was a similar experience for the one staff member inside the Youth for Christ youth center not far from the blast. To avoid the “colossal damage,” he ducked to the floor. Re-welding was necessary just to lock up the next day.

Peter Ford was fortunate. Working quietly in his faculty office at the Near East School of Theology near downtown Beirut, the first small reverberations stirred his curiosity to investigate the problem.

Moments later, the huge blast blew in his window and spewed the glass across his desk.

Miraculously, the dozen evangelical churches and ministries in Lebanon contacted by CT reported no deaths and few serious injuries caused by the massive explosion. The official national tally is now over 100 dead, with over 5,000 injured.

If they had, there would be nowhere for the bodies to go.

Habib Badr of the historic National Evangelical Church was forced to conduct the burial of two elderly members (whose deaths were unrelated to the explosion) as Beirut’s hospitals and morgues were all full.

Two Filipinos, however, were killed in the blast. And amid the ongoing economic suffering of Lebanon, several migrant domestic workers have been abandoned by families no longer able to pay for their services.

“They are distraught, worried, and scared,” said Chetti. “Problems are piling up one after the other. I’m reaching out to each one individually and praying for them, assuring them things will be okay.”

But migrants are not the only foreigners who are suffering.

“Many of our youth are Syrian refugees, so this is churning up all that stuff for them,” said Scot Keranen, director of operations for Youth for Christ. “We’re just checking in on them, and that is really tough right now.” Lebanese trauma goes further back in history. But this explosion was…

This article was originally published at Christianity Today, on August 5, 2020. Please click here to read the full text.

Following his decree earlier this month, Turkish President Recep Erdoğan’s joined a coronavirus-limited 500 worshipers to perform Friday prayers in the sixth-century Byzantine basilica, underneath the covered frescoes of Jesus and the Virgin Mary.

International condemnation resounded after the Turkish Council of State ruled to revert the UNESCO World Heritage Site back to its Islamic status. Conquered in 1453 by Ottoman sultan Mehmed II, the massive church was turned into a museum by the founder of the modern Turkish republic, Kamal Ataturk, in 1934.

Underreported in much of the criticism was a wider complaint.

“The action of the Turkish government evokes heavy memories on the desecration and destruction of holy sites of the Armenian people and other Christian nations by the Ottoman government for centuries,” said Garegin II, Supreme Patriarch and Catholicos of All Armenians.

There are an estimated 11 million Armenians worldwide, including 3 million in their modern nation-state.

Representing the diaspora from the Holy See of Cilicia, in Lebanon, Catholicos Aram I went into more detail.

“Soon after the Armenian Genocide, Turkey confiscated thousands of Armenian churches and transformed them into bars, coffee shops, and public parks,” he said, “ignoring the reactions and appeals of the international community.”

As Erdoğan is doing again now—and not just to the Hagia Sophia.

Turkey has assured the frescoes will be uncovered for all visitors (3.7 million last year) outside of prayer times—and now without a museum entry fee. More than 400 other churches continue to serve the 1 percent of Turks that are Christians.

But Erdoğan’s remarks in Turkish revealed a wider agenda. “The resurrection of Hagia Sophia is the sound of Muslims’ footsteps…”

This article was first published at Christianity Today, on July 24, 2020. Please click here to read the full text. 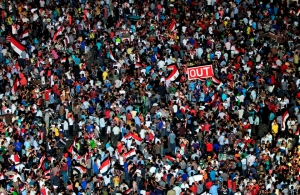 From my recent article at Christian Century. It walks through the transition which brought Morsi to power and thereafter deposed him. Here is an excerpt from the conclusion, focusing on the position of Christians:

As for the nation’s Christians, they view the military intervention as salvation. Coptic Orthodox Pope Tawadros, who had pledged upon his ascension to the papacy to stay out of politics, appeared side by side with Egypt’s chief Muslim leader to back the move. Protestants appreciated this as a public signal of Christian equality, while the Anglican bishop rejoiced Egypt was now free of the ‘repressive rule’ of the Brotherhood.

But are such public celebrations wisdom? In the fluid chaos of Egypt’s transition, who is to say the situation will not flip again? Copts are very careful to align with the nation’s moderate Muslims; dare they align with an extra-constitutional putsch against a large swath of religiously conservative neighbors? As citizens they are free, but as an ever-vulnerable religious minority will they find sufficient protection in the army and a hopeful emerging civil democratic order?

Perhaps they have no choice. Perhaps they see more clearly than anyone the issues at stake under Islamist rule. Only a year and a half earlier they suffered their greatest massacre at the hands of the army, when a Coptic protest was crushed under military tanks. Still, they took refuge.

This is the same question now faced by Egyptians as a whole, and as such the transition becomes more of a revolution proper. Islamist or civil; religious or secular – inasmuch as these are false dichotomies they also represent the current struggle. All that is lacking for a true revolution is violence; for the sake of Muslims and Christians together, may this development not come to pass.

This article was originally published in the Christian Century on July 17, 2012.

President Mohamed Morsy’s decision to reinstate the dissolved parliament has set off a firestorm of debate in Egypt. Is Morsy fighting for full democracy against a military regime? Or is he trying to institute a full Islamist takeover of government? Christians worry about the second possibility.

“There are attempts to take control of all state institutions,” said Karam Ghobrial, an activist with the Coalition of Egypt’s Copts, “and the biggest proof is Morsy’s decision to bring back parliament.” Ghobrial is one of many lawyers who filed an injunction against the president’s ruling. Ghobrial’s comments reveal a deep-seated Coptic distrust of Islamists. “There should be international attention from the United Nations to protect minorities,” he said, “because Morsy broke his oath to respect and uphold the law.”

Morsy’s presidency did not start off this way. “We as Egyptians, Muslims and Christians,” he proclaimed in his victory speech…

Please click here to continue reading at the Christian Century.

Egyptians vote today, but I am having trouble deciding if I wish or am able to make a prediction (especially after the last disaster). I think probably I will, but my mind is still spinning from recent events, so in all likelihood I’ll wait until tomorrow and gauge the mood after day one.

In the meanwhile I can share with you some articles published elsewhere in advance of the run-off elections.

From Christianity Today: A primer explaining who the Copts are.

This weekend, Egypt will choose as its president either Mohamed Morsy of the Muslim Brotherhood or Ahmed Shafik of the former Hosni Mubarak regime. (That is, unless fallout from a high court’s invalidation yesterday of the nation’s parliament cancels the election.) Few Egyptians are excited about these choices—including many of the nation’s Copts.

But who are the Copts? Generally understood as “the Christians of Egypt,” Copts comprise Orthodox, evangelicals, and Catholics who total 10 percent of Egypt’s 80 million people. (Egypt also has a sizeable population of Christian refugees from Sudan.) Both the euphoria and disappointment of the Arab Spring have brought these branches of Christianity in Egypt closer together as a community.

However, defining the Copts concretely is more difficult, explains Mark Nygard, director of graduate studies at the Evangelical Theological Seminary in Cairo (founded in 1863 by American Presbyterian missionaries).

“Copts are the historical Orthodox Church of Egypt. It is a fuzzy term, but strictly speaking it refers to those under the pope’s authority,” he said.

From Christian Century: Asking if Copts did, and now will, vote for the old regime candidate.

Coptic Christians, who constitute about 10 percent of Egypt’s population, were in a unique position to influence the first round of the presidential elections on May 23–24, the first election ever in Egypt without a predetermined outcome. It appears that they sided primarily with a representative of the old regime.

The top two vote-getters were Ahmed Shafik, who was appointed prime minister by Hosni Mubarak in a last-ditch effort to save his position, and Mohamed Morsi, the candidate of the Muslim Brotherhood. With Morsi and Shafik set to compete in a runoff election June 16–17, the election seems drawn as a competition between the old regime and the Muslim Brotherhood.

Morsi and Shafik each advanced with about 24 percent of the total, edging out Hamdeen Sabahi, who finished third. Sabahi is a long-standing opposition figure and a moderate socialist and Egyptian nationalist. As the centrist candidacies of Abdel Moneim Aboul Fotouh and Amr Moussa waned, Sabahi’s popularity exploded, especially among the youth, including many Copts. Fotouh is a former Brotherhood member who sought to be a bridge between Islamists and liberals. He attracted some Copts until receiving the endorsement of ultra-conservative Salafi groups, which scared many away. Moussa is a former foreign minister who fell out of favor with Mubarak, which increased his credibility. He attracted Copts who were sympathetic to the revolution but wary of drastic changes.

Youssef Sidhom, editor-in-chief of the Coptic newspaper Watani, estimated that about 60 percent of Christians voted for Shafik, 30 percent for Sabahi, and 10 percent for Moussa. As the votes were counted, one Sabahi campaign activist lashed out at Christians, claiming that they killed the revolution. He was quickly quieted down.

Yet is the charge true? Did Copts vote solidly for the most counterrevolutionary candidate? One must also ask: Did they feel the threat of the Brotherhood compelled them to make this decision?

For Sidhom, the choice has become clear. “The revolution is now in the hands of political Islam, and Copts must make a bitter choice to support the civil state. I expect Moussa’s supporters will easily shift to Shafik, but how will we be able to convince the youth, who were so dedicated to the revolution, to do so as well?”

Finally, for any Spanish speaking readers of this blog, please click here to access the Deia newspaper from Spain which is following the Coptic perspective on elections, and interviewed me in the process.

Best wishes and success to all Egyptians.