This article was first published at Christianity Today, on December 29, 2017.

In the latest terrorism to strike Egypt, nine people died in Friday morning attacks around St. Mina Church in the southern Cairo suburb of Helwan.

Two Coptic Christians were shot and killed in their nearby storefront. Six others died as they exited morning worship.

The remaining victim was a Muslim police officer guarding the church.

The church guard, meanwhile, was hailed as a martyr.

One week earlier, Egypt’s Minister of Islamic Endowments declared the guarding of churches to be “a legitimate and national duty.” Those who die defending Christian houses of worship are to be considered martyrs.

“In our war against terrorism,” said Mokhtar Gomaa, “there’s no difference between Muslims and Christians.” Last month, 300 people were killed in a terrorist attack on a mosque in the Sinai, where Christians have fled violence.

President Abdel Fattah al-Sisi praised the police effort against the “vicious” attack, and urged heightened security. Two weeks ago, Egypt assigned more than 230,000 police to guard churches in advance of the Christmas holidays.

Even so, last week hundreds of local villagers ransacked an unlicensed church in Atfih, 60 miles south of Cairo. They were offended at rumors the nondescript building would install a bell.

Meanwhile, the Coptic Orthodox Church will hold its primary Christmas celebration in the largest church in Egypt, on land donated by the state in its still-under-construction new administrative capital city. (Orthodox Christians commemorate Christmas on January 7.)

From my recent article on Egypt Source:

Education in Egypt has long been criticized, a fact recognized by the authors of the new constitution. Articles 19, 21, and 23 oblige the government to spend four percent of its gross national product on public education, two percent on higher education, and one percent on scientific research. These targets must be met, according to Article 228, by the school budget of 2016 and gradually increase thereafter until meeting international norms.

The constitutional referendum was approved on January 15, as high school students were readying to complete their exams before winter break. Their return to school was scheduled for February 9 but has now been postponed twice. The official reason is due to the 38 deaths from the H1N1 virus, though some suspect political instability plays a role. Regardless, students are now due to return on March 9, creating a near month-and-a-half long vacation. Elementary students, meanwhile, have been out of school since early January.

Constitutional solutions, if implemented, will take time to fix the system. But to see the extent to which Egyptian education is broken requires a first-hand profile. Ibrahim Awad is a 22-year-old resident of Helwan, though he prefers not to use his real name. He illustrates the degree to which a culture of education is lacking both in many schools and many citizens.

Ibrahim is delightful, though depressing. One small illustrative excerpt:

“I would go to school, but do nothing. Students smoked in class, and the teacher wouldn’t even show up,” Ibrahim said. He was similarly truant, and no one held him accountable. “Teachers considered that we were failing students and not worth their effort.”

The only reason he graduated was the culture of bribing the teacher with Pepsi and cigarettes. More than eager to shuffle the students through, the teacher looked the other way when Ibrahim helped his illiterate colleague by writing answers on both their tests.

From my recent article at Egypt Source:

It is a simple matter, really. No matter how many people poured into the streets on June 30 to demand early presidential elections, Mohamed Morsi had a mandate to govern for four years. “We cannot accept the loss of legitimacy because this is not our demand to compromise,” said Ahmed Kamal, youth secretary for the Muslim Brotherhood’s Freedom and Justice Party (FJP) in Helwan. “It is the will of Egyptians who chose Morsi in the democratic process.”

Fair enough. But in the mind of his supporters in the Muslim Brotherhood, he had a mandate for far more. “The people chose us,” he continued. “The Islamic ideology is to apply to the whole of life, and this is the view of our party.” Kamal’s words are punctuated by one of the key issues Morsi’s supporters grasp at: legitimacy. “When Egyptians chose it – and we do not wish to impose it – we cannot accept the idea of jumping over its legitimacy.”

Many commentators over the past year have criticized the Brotherhood for a majoritarian view of democracy. Kamal’s comments appear to bear this out. Morsi’s narrow win in the presidential elections, perhaps coupled with the sizeable Islamist win in parliamentary elections, was enough to confirm and empower the triumph of Islam. In their view, opposing their political project, therefore, is opposing Islam itself.

The interview continues to include Kamal’s views on Christians, martyrdom, and the Brotherhood conception of peaceful protest. Please click here to read the rest of the article at Egypt Source. 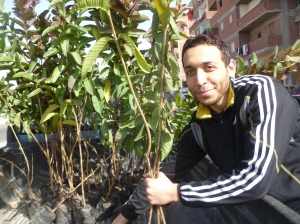 Not all in Egypt is chaotic.

The Muslim Brotherhood are repairing schools, serving the poor and beautifying streets.

While violent protests and political impasse grab the headlines, the Muslim Brotherhood has launched a much quieter campaign to commemorate the two year anniversary of the January 25 revolution.

Hatem Abd al-Akhir is the leader of the Brotherhood’s Freedom and Justice Party (FJP) in the city of Helwan, to the south of Cairo.

‘We wanted to celebrate the revolution in a different way,’ he told Lapido Media. ‘But other parties are trying to interrupt society and start another revolution.’

The Muslim Brotherhood built its reputation on providing social service to the poor. As the economy declines and their popularity diminishes, they peg the opposition as agents of instability.

Ahmed Kamal is the FJP youth secretary in Helwan. ‘We’re trying to get Egypt into a new stage of building and development,’ he said to LM. ‘This is the message we want to convey both inside and outside Egypt.’

To do so, the Brotherhood is planting one million sapling trees throughout Egypt, one hundred of which are in Helwan. Kamal led teams of youth digging holes in the limited dirt of the urban landscape, boring even into the sidewalk.

Abd al-Akhir, meanwhile, participated in the effort to provide a million citizens with healthcare. An ophthalmologist, he offered free eye examinations to diabetic patients and at-cost treatment for any operation.

As the manager of the Helwan Eye Center, he assures normal costs for patients are 30 percent below market standard. Yet the centre still makes a small profit, illustrating a mix of business and charity, politics and social good.

‘The Muslim Brotherhood is a logistics service for advertising,’ he said describing the campaign. ‘We want to propagate values in our community which will help keep the peace.

‘When we offer low cost service we oblige others to not raise their prices above what is acceptable.’

But in a time of great social and political upheaval, it is unsurprising some are critical.

Ahmed Ezzalarab is the deputy chairman of the liberal, opposition Wafd Party. ‘They are trying to distract people by giving a different image of development, but it is too late,’ he told Lapido Media. ‘They are being exposed for their secret agenda which the people are rejecting.’

Ezzalarab does not dispute their social work, but recognizes it is necessary to oppose the Brotherhood for their poor record in power. In recent weeks train accidents and building collapses have claimed the lives of dozens of citizens.

‘Governance has never been worse in Egypt’s history,’ he said. ‘They cannot run the country administratively; everything they touch fails.’

But in describing a secret agenda, Ezzalarab appeals to conspiracy.

‘We are completely against the violence, which is working to distract the people from the peaceful nature of the opposition,’ he said. ‘It is being funded by Wahabi and Gulf money, because they are scared to see civil forces come to power.’

Ezzalarab believes the Brotherhood is panicking, fearful the army will step into the violence and unseat them from power. Perhaps he is right.  Brotherhood leaders are clearly propagating the conspiracy theory.

Anas al-Qadi, Brotherhood spokesman said on the official MB website, Ikhwanweb.com: ‘This is the difference between the Muslim Brotherhood marking the memory of the revolution with greatly appreciated services, and so-called civil forces celebrating the revolution with flagrant acts of arson and violence, spreading chaos and destruction and vandalism.’

The website also accused one of the newly organized vigilante groups, Black Bloc, of being an arm of the Coptic Orthodox Church.

Any of the various accusations may be correct, but they are presented without evidence and signal that both social service and social violence are a means to an end.

‘If you are trying to apply Islam as you understand it, you have to reach authority by all legal and peaceful means,’ said Kamal. ‘To do this you have to show people why they must support you.’

Kamal was responding to the charge that the Brotherhood is putting good works on display, contrary to Islam.

‘We need to differentiate between being a Muslim and being part of an Islamist program which competes with other parties,’ he said.

‘As a Muslim, you can choose to tell or not tell of your good works, it depends on your intention. If you tell you can be a role model that others will follow, but God will judge you in either case.’

But for now, Egypt is the judge, and the verdict is a cliff-hanger.

This article was first published on Lapido Media.

Egypt has just witnessed some of the fiercest clashes in the revolutionary era, as many protestors appear radicalized. There are still peaceful demonstrations, to be sure, but even these appear to be violently resisted by police. It is hard to blame the police, though, as the lines are blurred.

I missed out on the latest battles. I spent January 25 in Helwan, a city to the south of Cairo at the end of the Metro line. The Muslim Brotherhood was conducting an outreach campaign to counter-program the message of demonstrations and unrest offered in Tahrir. I planned to take the Metro downtown to see these protestors, but on the way the car stopped and sat for five minutes – at the very stop nearest our home in Maadi.

Demonstrators in Tahrir had cut the tracks, causing a backup. Rather than waiting what could be an hour or more, based on previous examples, I left and went home, seeking to catch up on the news of the day, and perhaps go down after a bit.

A minute later, before I was able to exit the station, the Metro started up again. Perhaps it was propitious I had left.

These pictures taken this morning are from my first visit back to Tahrir. The worst clashes occurred in the Suez Canal cities of Port Said, Ismailia, and Suez, where a state of emergency has been declared. It is hard to know precisely what happened anywhere – the consequence of sitting home and following news updates and Twitter bylines. But the pictures to follow give a disturbing indication of where Egypt stands at the moment.

Is this the last gasp of resistance to a new order, or a sign of worse things yet to come? Please pray for Egypt, either way.