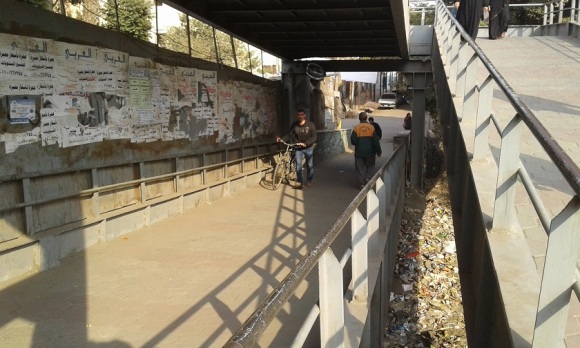 Two years ago I wrote about Egypt and her struggle to return to normal. Protests were still being waged on the streets, as terrorism assaulted the post-Morsi regime.

But that article featured also the mundane. A foot bridge was repaired by local authorities in the Maadi neighborhood of Cairo, but for a long time left uncompleted.

Pedestrians could cross, and it was quite fun to slide down-slope on the dust that gathered on the ironwork base.

But it didn’t feel fully safe, and crass revolutionary graffiti covered the walls.

I’m not sure when exactly it was made right, but crossing the other day reminded me of my earlier criticism. It is now in quite good shape, tiled, relatively clean, secure.

It is covered in crass advertising, but still.

I do miss the sliding, especially if my children are with me. But the bridge is a great improvement over what was.

In the two years that passed Egypt has basically put an end to the demonstrations. But terrorism is still present, and now the economy has taken a downturn. Life is not yet back to normal.

But the bridge is. So are many other minor but essential aspects of life. Stoplights have been installed, and they are generally working.

So as you survey the news from around the world and wonder how everything falls apart, please remember that it also gets put back together. So often this is left unreported, but it is the reality for ordinary millions.

Not that life is necessarily great, nor up to our comparatively wealthy standards in America. But life goes on, life is good, and people make it work.

Credit, where credit is due.

One reply on “Where Credit is Due”

Having had the joy and good fortune of living in your home, over the 2013 revolution, the work was ongoing at the Hadayak El Maadi metro station, you now have a modern station with escalators and lifts together with concourse and covered platforms, The old foot bridge always set my asthma off. So yes life moves on and. Hopefully will continue to get better. As people celebrate the 2011 revolution, it is great to see it pass peacefully, and the Sadat Metro station under Tahrir Square remained open, Egypt is one nil up on their Match against Ghana in their group match in the African Cup. May they continue in their success.