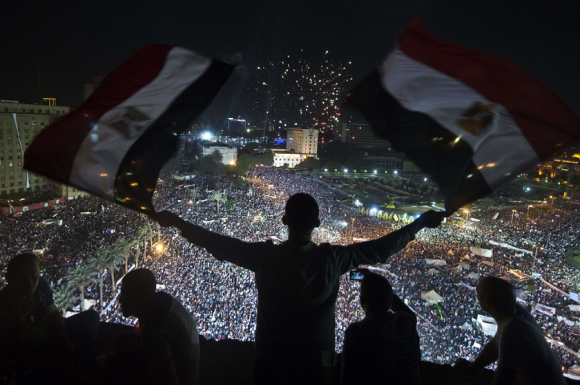 Do you remember what the Egyptian revolution was like? In an op-ed on Ahram Online, Hani Shukrallah gives these poignant paragraphs in a long essay considering if Egypt is now less ‘Islamic’.

For background context, he considers the recent call to remove the veil, the emergence of television programs questioning traditional Islamic interpretation, and the renewed effort of the Azhar to assert its prerogative in all such matters. These are reactions to an old paradigm, he believes, that was dealt a blow by the revolution in a peculiar way:

The Egyptian Revolution was profoundly secular, if not secularist. After more than nearly four decades of the inexorable rise of Islamism came a popular revolution of millions that conspicuously made a point of putting religion (with all its uncomfortable impedimenta) on the backburner. Similarly to all the Arab Spring uprisings, Egyptians in motion spoke not of Sharia, rule by what God ordained or the restoration of the Caliphate. As the whole world came to know, the banner of Tahrir was freedom, democracy and social justice. They did not speak of an Islamic nation, but rather reclaimed the flag, redefining Egyptian nationhood as one arising from the fundamental human dignity of its citizens.

It went even further. As if picking up from where the previous popular revolution in their history (the revolution of 1919) had left off, the young men and women of Tahrir and elsewhere around the country took the hitherto stunted notions of citizenship and equality to new and unprecedented heights. Women, veiled or unveiled, were now fully equal to men — their bodies, which for decades had been put at the very heart of the symbolic battle over the nation’s identity, its political, social and cultural makeup, its present and future, were rendered a non-issue. The Egyptian Revolution did not debate the hijab; it ignored it — and in doing so dismantled its very basis, symbolically and practically.

Similarly, Coptic/Muslim Brotherhood was an overriding theme of the Egyptian Revolution. Previously inconceivable images of demonstrators holding aloft the Quran and the Cross, Coptic human shields around Muslims performing their prayers, seemed to roll back, within weeks, decades of effective disenfranchisement of Egypt’s Christian minority, holding Copts hostage to the Islamist/police state contestation, with each side taking a swipe at what had become the country’s preferred whipping boy.

And herein lay a fundamental feature of the Egyptian Revolution (indeed, the whole Arab Spring), which many commentators have failed to grasp. And this is that in neither targeting nor deploying religion, it sidelined it, pushed it out of the political realm, and rendered it politically, ideologically and culturally neutral. It was not anti-Islamic or pro-Islamic; it simply was non-Islamic. Not anti-religious but non-religious.

This is the very definition of secular.

The Egyptian revolution was many things, fueled by many parties with diverse goals. But fundamentally he is right, at least in presentation. All these groups, including the religious ones, largely put forward a secular image if only for pragmatic reasons. It was not named ‘secular’, but acted so.

His is an astute observation in retrospect, however much he longs for it to have been true, or at least, to have continued truly.