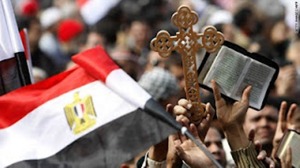 Solidarity of group is good. But there are many groups in the world. Who stands with whom?

Give wisdom to the Tarabin of Sinai, who pledge to support the government in the fight against ISIS.

Give wisdom to the government, to know if and how to accept.

Give wisdom to the other tribes, to navigate this minefield.

ISIS holds no territory in Sinai, but they appear to have some freedom of movement. The role of the tribes is key, but uncertain. Do they protect or simply tolerate, or are they themselves intimidated?

The Tarabin have suffered losses at their hands, having cooperated with the state. ISIS, meanwhile, is doing what it can to exploit tribal fault lines to win support and create division.

Their solidarity seems right, but should it be armed? Theirs is a separate group, no matter how loyal.

The loyalty of other groups is being tested. The stakes are high.

Defeat the menace, God, with the support of all. As for the solidarity of government and tribes, show Egypt the best polity. Make a state of citizenship; honor an ancient code.

But there is another ‘tribe’ that operates within the field of citizenship, within the fold of the state. The Brotherhood has suffered losses, having antagonized the state.

One leader died in prison from a stroke. They accuse of lack of timely medical intervention.

A popular soccer star has assets confiscated from a business began with their partnership. He says he is independent, but where does his loyalty lie? Should the question even be asked?

The solidarity of the Brotherhood gives them great strength; it also creates networks that can be pursued. After a year in power, and a year without, many are vulnerable.

So bless them God. Reveal the innocent, convict the guilty. But help their solidarity find right relation to the state.

In Sinai or in cities, in secret cells or prison cells, give wisdom. Honor the solidarity that serves a higher cause. But meld each solidarity with the competing others, and make the state an effective, arbitrating servant.

That each one, in solidarity with all, might serve you. Make this the largest tribe.