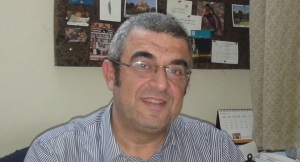 I met with Ehab el-Kharrat in his office just off Tahrir Square on March 15, 2014, shortly before the presidential elections. Kharrat is one of the founding members of the Egyptian Social Democratic Party, and though the party remained neutral, he endorsed Hamdeen Sabbahi, one of the few high profile Coptic leaders to do so.

As we know now, it turned out to be a losing proposition, as he was crushed by Abdel Fattah al-Sisi. But as Kharrat explains, it was a principled vote more than one to back a likely winner. Being principled is important to Kharrat, and the interview explores this theme in relation to his Christian faith and deep involvement in politics.

The following is an excerpt from the transcript published at Arab West Report.

You grew up in a leftist home and had a personal conversion. Perhaps this is not the normal story of Christians in Egypt?

My father is one of the most prominent intellectuals in Egypt. He is old now at 88. He is a novelist, literary critic, and short story writer who has been acclaimed and received the most prominent awards in Egypt and the Arab region. He was even nominated by Naguib Mahfouz to be the second Nobel Prize winner from Egypt.

He used to be a Communist Party leader as a young man though he moderated as he became older. He was imprisoned two years under King Farouk. I read Marx and Freud and Sartre before I read the Bible, actually. I had a personal experience with the Lord when I was 18 with the youth of Kasr el-Dobara Church, and it was an intense spiritual experience.

I became very active in the church and I had to struggle with the question of should I still be politically active or not. I had been an active member of leftist groups at Cairo University, though never a member of secret organizations.

I became a preacher, a youth leader, and an assistant pastor at Kasr el-Dobara and was instrumental in our phenomenal growth from a couple of hundreds to our current count of five or six thousand. I was the interpreter for Billy Graham and Louis Palau, and for a number of years I was an evangelist. I think I got thirty or forty thousand professions of faith. I was counting at that time.

Most American evangelical Christians tend to lean toward the right rather than the left. Why do you find the left is a better fulfillment of your Christian faith?

If you study the Bible carefully and its emphasis on justice, the rights of the poor, anti-exploitation, and protection of the weak and vulnerable, you cannot escape that this is the brunt of the political position of the Biblical writers.

Of course there is the aspect of creation of wealth and this is a social democratic position too. I am not against personal entrepreneurship, being creative, or being rich. Many evangelicals in America are not giving enough attention to justice or the poor, but if you can find a political tendency in the Bible this is it.

It is not ‘name it and claim it,’ ‘be as rich as you can,’ or ‘trickle down policies.’ You cannot find these in the Bible. Even ‘compassionate capitalism’ as Francis Schaeffer says. When the Bible talks about the rights of the poor it is clear it is not about mercy or compassion. It is about justice.

Please click here to read the full transcript at Arab West Report, including extensive comments about his participation in the January 25 and June 30 revolutions. Here is a sample:

You don’t want to over-spiritualize the situation, but here is a spiritual question. In recent days some of the leaders of the popular opposition against Morsi have said there was police and military involvement. This suggests it was not just a grassroots movement, it was also a state manipulated movement.

Look, the movement started from our ranks, young people from the National Salvation Front. They gathered many signatures against Morsi and it was clear they had popularity. They were approached by the police and the military intelligence, and they talked to them. It is not like they became their agents, they cooperated, which is legitimate because we made clear we did not want to destroy state institutions only topple Morsi.

The signature campaign started the first of May, and I signed publicly the 10th of May with all our leaders. By early June it was clear the police and military intelligence were not going to oppose us. We made friends with the institutions, yes, but the movement was not manipulated by the government.

So this is my question, then: A Christian in politics must be straight in all he does, but politics can be about maneuvering, even manipulation. I don’t know if or where the line is crossed, but as a Christian, were lines crossed in the movement against Morsi?

I did not do any under the table negotiations and I think politics should be a clean game. The Brotherhood said that politics is a dirty game, and they played it dirty and paid the price. Whoever is not of integrity will lose. I believe politics should be straightforward whether you are a Christian or not. If you play by principles at the end you will prevail.

One reply on “Ehab el-Kharrat: A Protestant Political Leader in Egypt”