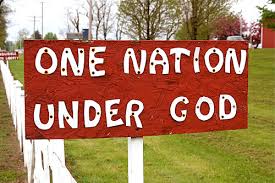 During the US Open golf tournament in June, NBC television station came under fire for producing a montage of patriotic images and the spoken text of the Pledge of Allegiance, only with the words ‘under God’ left unarticulated. In July the company issued a formal apology, denying any anti-religious bias was involved, only ill-advised editing. Incidentally, the word ‘indivisible’ was also left out.

Many conservative commentators and religious Americans were skeptical. Even if accidental, the omission feels to them like one more salvo in an assault on religion. Others note that the phrase ‘under God’ is not a tribute to the foundational religious framework of the republic, but a Cold War assertion of religiosity. The Pledge of Allegiance was originally penned in 1892, and officially adopted by Congress in 1942. ‘Under God’, however, was only inserted into the pledge in 1954.

Meanwhile in Egypt, there is a similar controversy. Following the revolution the current plan is for Egyptians to elect a Parliament, which will then select members to draft a new constitution. Fearing an Islamist victory, many liberals are calling for the constitution to be drafted first.

Islamists, however, rally support by raising fears that the liberals will oversee a constitution which removes the current Article Two. This article states that Islam is the religion of the state and the principles of Islamic sharia serve as the basis for the legal code.

The now defunct Egyptian Constitution was drawn up in 1971 by President Anwar Sadat in an effort to somewhat liberalize society after the rule of Gamal Abdel Nasser. At the same time in effort to resist the socialist tendencies of the state rooted in his predecessor, Sadat sought the aid of Muslim religious groups. As a nod in their direction, it is understood, and to cement his own religious legitimacy, he introduced Article Two into the constitution in 1980.

To what degree does a religious heritage need grounding in the laws or pledges of a state? Can a nation have a religion?

Secularism, meanwhile, is the current boogeyman of Egyptian Islamist politics. But does Article Two discriminate essentially against the Christian minority? Or does the potential removal of the article sideline the place of Islam in crafting appropriate legislation for a religious population?

As best I read the tea leaves, neither the Pledge of Allegiance nor Article Two are under serious threat. Yet religion can be a remarkable populist rallying cry, if cynically noted, or else touching the sensitive soul of a people, if sympathetically noted.

To delve into critique would require study of the depth of each nation’s legal code and respect for human rights. Yet do you as a reader find yourself in the general opinion of:

What guides your choice? Particular religious leanings, consistency of principle, or clear differences in the two situations? What does your choice communicate about you?

Please feel free to vote, and to share your rationale in the comments.