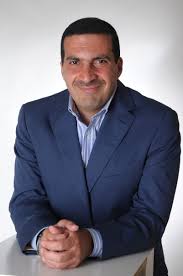 Joel Osteen, Joyce Meyer, T.D. Jakes, Amr Khaled. To American Christian readers of this blog, the last name may not be as familiar as the first three. All the same, the phenomenon is similar. Amr Khaled is a popular Islamic television personality, very different than the traditional sheikh dressed in a robe and speaking of fatwas. He dresses sensibly, encourages his listeners in Islamic morality, and relates stories from the Qur’an and hadith to the everyday life of the middle class. In short, he and others like him present Islam to Muslims of the modern age.

As such, he can be very controversial. Islamic sermons are still disproportionately the domain of traditional scholars who may view these modern preachers as a liberal compromise with a culture becoming increasingly ‘Western’. On the other hand, secular Muslims may be troubled by the fervor such preaching instills for Islamic orthodoxy among the middle and upper classes who might otherwise be ‘untroubled’ by religion. Popularity breeds both followers and detractors, and the charge is made that such personalities profit handsomely from their spiritual work.

The topic of these Islamic Televangelists was taken on by one of our interns here at Arab West. The result is a brief but informative study that examines their message and impact on the Arab World. It even includes YouTube footage, though without translation, so you can watch and see if the presentation reminds you of programming available on a Sunday morning or Christian cable television. The link to read the report is here. I hope you enjoy, and get a good picture of what the talented interns at our center can produce.

One reply on “Islamic Televangelists”