Yesterday, in a third attempt, I was able to see the final resting place of Pope Shenouda.

All efforts were arranged by my friend Rashad, who I met through studies at a Coptic Orthodox theological institute, and who regularly organizes group trips to the various monasteries of Egypt. One such ordinary trip was to the Fayyoum region, where I had a daddy-daughter date with my firstborn.

The first attempt was canceled before it started. Rashad realized half the Coptic world was on its way to St. Bishoy Monastery in Wadi Natrun where Pope Shenouda was interred. Though he called around to solicit fellow pilgrims, he called it off later that same day.

The second attempt was a week later, and my second-born and I made our way to Wadi Natrun before realizing the other half of the Coptic world preceded us. Rashad wavered in continuing on hearing reports of the great traffic; when he heard of several deaths as Copts crushed against each other, he redirected us to the nearby Makarious Monastery instead. I had hoped to write comparing the shrine of Shenouda to that of his predecessor Pope Kyrillos, which I visited just before Shenouda’s death. Instead, I simply reflected on the effort to do so, focusing also on the shrine of the martyrs from the 2010 bombing in an Alexandrian church.

The third attempt succeeded. The trip was relatively uneventful, save for a flat tire on the way. Once again the monastery was packed – the visiting communion attendees filled half of the massive cathedral built on its grounds. 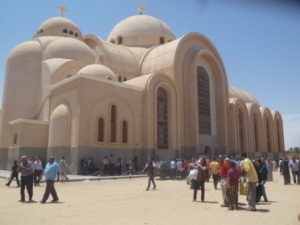 Afterwards we delayed and had breakfast in the monastery cafeteria, allowing everyone else to jostle their way into the shrine. An hour later, we were able to walk through briskly.

Briskly it was. There were attendants inside asking people to keep to their orderly lines and move quickly through the building. People threw prayers written on scraps of paper onto Pope Shenouda’s above-ground tomb, seeking his intercession. As they circled they touched their hands to the marble, seeking his blessing.

If either were to be had, they were had quickly. Within two minutes we were outside again. By now the crowds were low, and I returned for a second circumambulation in order to take the following video.

Click here for the four minute tour, with accompanying commentary.

It was both surprising and impressive to see the guardrails and organization at the pope’s tomb. Thinking back to the news of the deaths by crushing, my curiosity wondered if they were present that day. Unfortunately, I failed to discover an answer. Either way seems possible – the area was very tightly constructed.

St. Bishoy Monastery was Pope Shenouda’s choice for his remains. In 1981 he was banished here by President Sadat. After President Mubarak restored him to the papal throne in 1985, he established a practice of returning regularly for prayer and contemplation.

To close, here are a few pictures of the monastery, including other shrines housed therein.

Five people were killed yesterday at St. Bishoy Monastery, crushed to death visiting the shrine of Pope Shenouda. I was nearly there, along with my three year old daughter.

It was meant to be part two of my visits to the shrines of the most recent popes. The second leg was not planned with the first; a day before Pope Shenouda’s death I was with Coptic Orthodox friends on a trip to St. Mina Monastery near Alexandria, to visit the shrine of Pope Kyrillos (Cyril VI).

These same friends then organized a trip the first weekend after Pope Shenouda’s burial, but postponed it out of fear of the expected massive crowds. Instead we set off on the second weekend, but ran into similar trouble.

Feeling semi-guilty for disappearing for the second time over three weekends, I volunteered to take my daughter with me. I had done so earlier with the oldest child, and we had an enjoyable outing. Of course, the country wasn’t exploding at the time.

To avoid the early morning rush my organizing friend decided to first stop at the nearby Baramous Monastery for breakfast. This monastery celebrates two Roman Christian brothers born into a wealthy family who left all and went to live in the desert. As per her custom, my daughter enjoyed playing in the dirt after mass, and then we enjoyed our shared meal of fried bean sandwiches, French fry sandwiches, and lentil dip.

It was then we sat and waited, and waited. Monastery trips with Copts are usually festive times of visiting ancient sites, buying lots of religious trinkets, and taking blessing from the monks while seeking their intercession. On this occasion, understandably more somber due to the pope’s death, there was simply a discontented confusion.

Our organizer was incessantly on the phone with someone from St. Bishoy Monastery where we were headed. As the minutes ticked by he received more and more encouragement to stay away. At first it was simply too crowded. Eventually we learned they had closed off the area. Finally he was informed that several pilgrims had been killed.

Even so, it was difficult to convince our group not to continue on. The whole point of this trip was to visit the pope’s final resting place, and for many this meant securing a great blessing. The organizer sought to convince them God would reward them according to their intention, and that even Pope Shenouda himself would be displeased if we continued. Should we contribute to the chaos and disruption of his sanctuary, simply for our personal blessing?

Eventually we left to seek blessing from another nearby monastery, St. Makarios. This 4th Century saint lived celibate with his wife (who was forced upon him by his family) until her death, when he was finally free to devote himself to God. He was the first monk to settle in the Wadi Natrun desert, where four historical monasteries now continue.

It turns out, however, nearly every other would-be St. Bishoy Monastery visitor had the same idea. We sat in our bus for an hour simply waiting to be processed at the gate. After eventually getting inside, we joined the dispirited crowds milling about the premises for about half an hour, until the monks reclaimed their silence and had everyone leave. From here we had our final meal together, and began the trek back home.

Though disappointed to not see the pope’s burial grounds – the whole reason for the trip – I was pleased to go to St. Makarious where I had resided three days in a monk’s cell and had a few friends. But even this hope failed, as one elderly monk told me there was no way he was leaving his quarters to wade through the masses who would surround him looking for blessing. Then I learned a younger monk I knew also could not greet me, as he was recovering from open heart surgery.

The day was not supposed to be like this, and I am glad I had my daughter with me to pass the time and enjoy her company. She was blissfully unaware of everything but the dirt, happily making her own mini-monasteries wherever she could.

It was supposed to me more like part one of the papal shrine tour, only amplified in both numbers and grief. Two weeks earlier I was among a similar crowd of pilgrims, brought to St. Mina’s Monastery the weekend after the celebration of Pope Kyrillos’ death. St. Mina was a Roman Christian soldier who left the army to practice monasticism, and was later martyred. Pope Kyrillos adopted him as his patron saint.

The grounds were packed, the crowds were in revelry.

Here are some photos of his shrine: 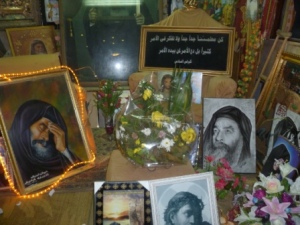 And here is the scene around his tomb:

Finally, here is a crowd gathered around his ‘hymn of praise’, chanting his virtues and extolling his life. Click here to watch a video of this scene.

It is difficult to know what to make of such devotion. To provide snide evidence of the backwardness of Coptic spirituality, consider this picture:

At the Baramous Monastery this garden scene has water flowing continually from the ceramic pitcher. Without exploring further, I assumed it was a simple hydraulic function common in many suburban fountains. The assumption of several passers-by, overhearing their conversation, was that this was a miracle of the monastery.

Yet to provide sympathetic evidence of the suffering depths of Coptic spirituality, consider these pictures:

St. Mina’s Monastery hosts also the remains of Christians killed on New Year’s Eve 2010, when a bomb exploded outside the Two Saints Church in Alexandria. I have written earlier about the shrine dedicated to these martyrs inside the church, but I had never seen such a memorial previously.

In the United States one can often see a small cross erected on the side of the road where a loved one was killed in a traffic accident. There are memorials for those killed in war, during 9-11, or in other national tragedies. Yet America, best I know, has no religious martyrs.

Egypt, on the other hand, is full of them. The Coptic calendar dates from 284 AD, when Diocletian became Roman emperor and ushered in the bloodiest period of Christian persecution.

Popes Kryillos and Shenouda died natural deaths, but they provided historical leadership for the church of martyrs. Celebrated saints have interceded through miracles for countless Copts through the centuries. Pope Kyrillos has done the same, and now Pope Shenouda is poised as well.

Perhaps the cynic points out: Could he not then have prevented the deaths of three Copts in Cairo, and five at the monastery – all who were there out of love for him?

As I mentioned, it is difficult to know what to make of such devotion.

As Pope Shenouda has placed on the lips of every Egyptian Christian: God is present.