From my new article in Lapido Media:

A new collaboration – in an old mission hospital – will train Egyptian surgeons to serve in rural settings.

Sixty per cent of Egyptian doctors work abroad – but a unique collaboration will fight this trend.

Incredibly perhaps, Egyptian Christian Dr Hanna Sherif is relocating from an élite life in Toronto, Canada to the small village of Menouf in the Nile Delta for the next five years, in defiance of a US State Department warning of ‘risks of travel’.

An acclaimed liver surgeon and academic, Sherif is returning to his country of birth after a forty three year absence to run a new in-country surgical training programme…

Here is a brief excerpt about what he will do, and the motivation thereof:

Harpur’s resident trainees will benefit from 10-15 visiting surgeons each year, and will spend six months of their programme in large hospitals in Kenya, Cameroon, and South Africa.

In exchange the residents will work at least one year in the handful of PAACS-accredited Christian hospitals in Egypt for every year they are financially supported.

Rural hospitals, including old mission hospitals, are often not well equipped and generally pay low salaries, said Hanna. As such they fail to attract well-trained surgeons.

He told Ahram Online this drives 60 per cent of doctors abroad.

Thompson believes maintaining the standards of care for the poor under these circumstances in the least attractive districts requires a special commitment.

‘Christian hospitals will go out of business if they cannot hire well-trained specialists that are committed to their values,’ said Thompson. ‘Ours is to honour and glorify Christ in his command to care for the sick.’

From my latest article in Lapido Media: 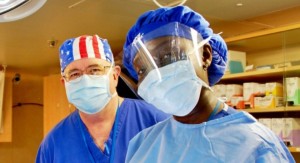 If not for Frehun Ayele, Fatima would still be wet with urine. The eleven-year-old native of war-torn Somalia traveled over 500 kilometers to Addis Ababa for an operation on her bladder, which was completely open to the skin since birth.

‘For children in need of surgery, it is a big challenge,’ Dr. Frehun told Lapido Media, describing waiting lists of over a year. ‘The most vulnerable in terms of disease severity, poverty, and distance, suffer much. Only the fittest survive.’

Frehun is unique as the first Ethiopian to be trained as a pediatric surgeon in Africa. Three months ago he halved the waiting list by opening the nation’s second pediatric surgery clinic, BethanyKids, in cooperation with the Korean-founded Myungsung Christian Medical Hospital.

‘Before the arrival of BethanyKids, there were three pediatric surgeons for over ninety million people,’ said Dr. Dan Poenaru, Frehun’s training surgeon and now partner in the clinic.

This was a very fun article to write. It was also a challenge, done remotely, relying on email. Many thanks to the people of PAACS for helping. PAACS, by the way, stands for the Pan-African Association of Christian Surgeons:

an organization dedicated to the training and discipling of African surgeons to provide excellent, compassionate care to those most in need.

Their work is for the good of the continent and all its religious adherents, but a very clear commitment to Jesus is part of their methodology, one which they believe makes all the difference:

Gray helped arrange the exchange of residents with the national training center in Addis Ababa University, which is open to students of all faiths. But according to Dr. Bruce Steffes, the executive director of PAACS, it may have been the organization’s Christian commitment which made the difference.

Speaking with a particular government minister who was suspicious of the missionaries, Steffes pointed out all twenty-eight PAACS graduates were serving in their local context, often in rural areas.

‘I may have influenced his decision,’ he said, ‘by pointing out that their desire to serve Jesus is what motivates them to serve in those areas.’

‘Many of the brightest and best medical students leave for training abroad, but after five years of training put down roots and stay there,’ he said.

Thompson said there is a greater than ninety percent attrition rate, a significant brain drain costing Africa the surgeons it needs. Even for those who do return, he says, most cannot function for more than a few years, as they were trained in ideal conditions in the West.

‘We train them in these resource poor environments,’ Thompson said, ‘so they know how to operate here.’

Please click here to read the entire article on Lapido Media, and have a look at the PAACS website as well. Do consider them for your support.