Anne Zaki is assistant professor of preaching and practical theology at the Evangelical Theological Seminary in Cairo. Raised in a Presbyterian home in Cairo, at age 16 she left the Middle East to travel alone to a progressive boarding school on Vancouver Island, Canada.

In 2000, she married a Syrian-Canadian pastor, and as a mother of four, she completed her master of divinity degree from Calvin Theological Seminary in 2009. Zaki was always confident she would return to Cairo, and the family relocated there nine months into the chaos of Egypt’s 2011 revolution.

CT spoke with Zaki about the transformative power of Scripture in her own life and in the Egyptian church.

How did Scripture shape your early faith?

Eight months before going to Canada, I had an experience of personal encounter with Jesus. I knew I was different. Even my family noticed the change.

But in my new school, for the first time I was being exposed to religions other than Christianity and Islam. And it wasn’t just exposure. It was a school that was set up to appreciate and promote diversity. I had my first big spiritual crisis. I had to ask myself: Why do I believe what I believe? Is it just because I grew up in it?

I sort of made a deal with God. I told him, If you really are who I have known you to be, who they told me that you are, then prove it to me through your Word without the influence of anyone else. So for me that meant no church, no youth group—not even Christian music. And during that period of six months, God’s Word was sufficient to reveal himself, to prove himself, to be his witness.

How did you sense God revealing himself to you through his Word? Can you explain further?

Every day, I would read a certain portion of Scripture, meditate on it, and pray it back to God. The things that didn’t make sense I would throw back at him, and we’d have a debate about them. Usually…

This article was originally published in the special September print edition on women’s voices in scripture engagement. Please click here to read the full text, where you can download the entire issue for free. 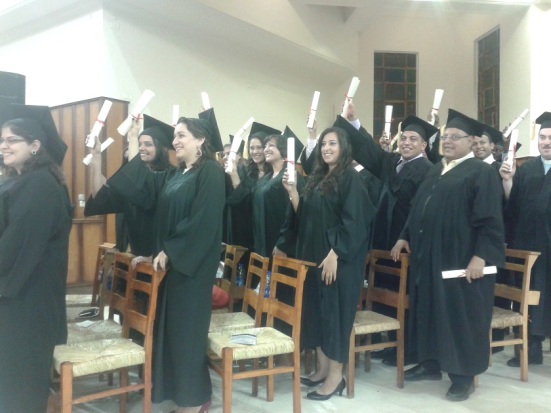 Ten years after its founding, the Anglican Alexandria School of Theology (AST) celebrated its first graduating class to receive the degree of Masters of Arts in Theology. The four students joined the July 18th commencement exercises with 27 others who received a Bachelors in Theology, plus one who completed a two-year diploma program.

Rev. Samy Fawzy, principal of AST, congratulated the graduates for their efforts over the past four years, despite the difficulties Egypt has experienced. Rev. Atif Mehany, dean of the Evangelical Theological Seminary in Cairo, urged them further in his commencement address to overcome the challenges following the Arab Spring and fulfill their responsibilities to serve both church and society.

Rev. Fawzy conferred the degrees with Bishop Grant LeMarqand, vice-chairman of the board of AST, and Rev. Mouneer Hanna Anis, chairman of the board of AST, bishop of Egypt, North Africa, and the Horn of Africa, and president bishop of Jerusalem and the Middle East. They were joined by Bishop Peter Tasker, representing the archbishop of Sydney and AST partner institution Moore College in Australia.

Class representative Philip Bishay offered thanks to the staff and professors of AST on behalf of a diverse body of many denominations, who through dialogue and unity completed each other, he said. He encouraged all in attendance to let the light of God fill their hearts, which will then shine no matter the darkness around them.

This article was first published at the Anglican Diocese webpage.