This article was first published at Egypt Source.

Accusations against the Coptic Orthodox Church are many. It is in bed with the regime. It desires a political role. It monopolizes the Coptic voice, keeping the faithful within its walls. It is not difficult to find evidence that can fit the accusations. But as the church talks to its own people, not only is it aware of these perceptions, it is actively working to dispel them.

“The church is a pure spiritual institution,” Pope Tawadros said to the gathered crowd of 700 youth, emphasizing also a societal role. “It is the national church of Egypt, it is ancient. But we must not be closed upon ourselves.” Tawadros was speaking at a conference entitled “Building Consciousness,” organized by the Coptic Media Center (CMC), the media arm of the church. Hosted in Cairo, it followed two gatherings in Upper Egypt, with an upcoming meeting in Alexandria and the Delta. Participants are handpicked as active and influential leaders able to carry the message back to their churches.

Building Consciousness, according to CMC head and church spokesman Fr. Boules Halim, is a multi-year campaign designed to create educated, enlightened Orthodox Christians, able to think for themselves and engage with society. “They should vote and join political parties,” he said. “They should build their society and not be secluded. Connection to [the] church should not encompass their whole life.”

For many Copts this would be a radical departure. During the long era of now-ousted President Hosni Mubarak and the late Pope Shenouda, Egyptian citizens, including Copts, were depoliticized. As the state withdrew from social service provision, the church stepped in to fill the gap for its flock. Spiritual programs also multiplied, but as devotion increased so did the sense of the church as an alternate society, a place safe for Copts away from the trials of the world.

The state presented itself as a bastion of stability and semi-secularism against an Islamist threat. The church received the mantle of Coptic political leadership. The relationship had its ups and downs as it negotiated issues of sectarian violence, family status laws, and Coptic criticism from the diaspora.

The thrust now is to prepare Coptic citizens for leadership, but Building Consciousness is not a new emphasis of the church, according to Halim. It is the renewed application of Christian teaching to replace a reality that was forced upon them. “Society refused us,” he said, citing, for example, discrimination in state youth centers and sport programs. Speaking on the relationship between Mubarak and Shenouda, he said, “This is how the state wanted it, it was the nature of that stage.”

Egypt is now in a new stage, having passed through revolutionary tumult. While a large majority of Copts have strongly endorsed the regime of President Abdel Fattah al-Sisi, Halim is cautious, though encouraged. “Until now we still don’t have a convincing picture of citizenship, but there is hope,” he said. “The early signals say to us, ‘Come and participate,’ and the government is creating a conducive climate.”

Both Tawadros and Halim emphasized that the church will play a national role to encourage electoral participation. Attempting to allay concerns that this initiative opens up the church to similar criticisms made of Egypt’s short-lived Brotherhood government, they say it calls on all citizens to vote for the most qualified candidates and not on the basis of religion. It will use church networks to urge Copts to the polls, but will not endorse candidates, nor filter Coptic politicians through the political parties. This may happen at the local level, Halim conceded, but it is refused. There is no central electoral strategy in the church.

Besides politics, the Coptic citizen should be active also in the development of the country. But this area reveals potential contradictions in the message. The church has an organizing role, said Halim. He envisions a future in which every diocese has both a Coptic hospital and a Coptic school, open to all, without discrimination. As registered private schools, they will follow the national curriculum. The few schools currently operating have only a handful of Muslim students, as Copts have flocked to enroll. But once there is sufficient number, Halim hopes the student body will be distributed equally according to religion.

“If we can have a role in education, it will contribute greatly to better consciousness and open minds,” he said. “When enlightenment reaches the other it is more powerful. It produces coexistence, knowledge, love, and common cause.” During his presentation Tawadros advocated similarly. “We must serve society within the possibilities available,” he said, “completing the government in the provision of services.”

Such plans have provided fodder for Islamist critics accusing the church of proselytizing. While nothing in the conference suggested this aim, it is clear the church preaches a certain conception of society. One of the pillars of Building Consciousness is emphasis on the dual nature of Coptic and Egyptian identity. This, while at peace with Muslims, may be at odds with an Islamist agenda.

Viewed through the lens of the last four years of struggle and polarization, the issues are also quite political. The church insists it is not involved in the micro issues of elections and policies. But its vision is to shape society in the acceptance of macro issues of citizenship and national identity.

Here, the church wants Coptic citizens up to the task, even as it leads the effort. But in their eyes there is little contradiction, as the church with its members is the body of Christ. If it desires Coptic citizens to play an active role in society, it falls upon church leadership to teach them to do so. Where does the church stop, and the Christian begin?

According to Halim, the church as an institution desires strongly to leave these matters aside and return strictly to a spiritual, shepherding role. But too much is at stake in this transitional period. “If one calls for the church to have no role whatsoever, this will be when full citizenship becomes a reality,” he said. “But as long as citizenship is lacking, the country needs us.” 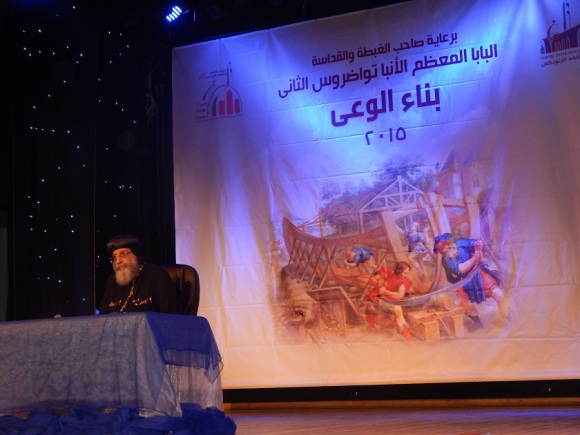