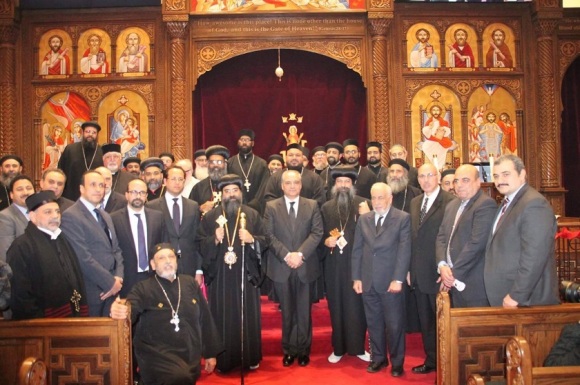 Forty days later, the pain of terrorism in Egypt resonates as far as New Jersey.

On December 11, 2016 the Coptic community of Egypt was shaken by a suicide bomber, killing 28 worshippers in the St. Peter and St. Paul Church adjacent the Coptic Cathedral.

“Deliverance from our enemies comes only from God,” said Archbishop Karas, patriarchal exarch for North America in the Coptic Orthodox Church.

“But this is not new, martyrdom is part of living our lives in Christ.”

Archbishop Karas was one of many religious and political dignitaries present during a commemoration service at the St. Mina Coptic Orthodox Church in Holmdel, NJ. Copts sometimes jest that their diaspora in New Jersey is the ‘Shubra’ of the United States, referring to the mixed but heavily populated Coptic neighborhood in Cairo.

Approximately 1000 visitors gathered on January 13 to honor the martyrs who lost their lives, fitting with the traditional Egyptian custom of mourning the deceased on the fortieth day after their passing.

This corresponds to January 20, but host Fr. Michael Sorial explained the service was moved forward to avoid scheduling on the presidential inauguration.

Fr. Sorial offered thanks to Egyptian president Abdel Fattah al-Sisi for his response to the tragedy. Immediately he promised to restore the Cairo church to its original condition in time for Coptic Christmas on January 7, and honored the victims with a state funeral.

The work completed, Sisi visited Coptic Orthodox Pope Tawadros II for Christmas mass in the Coptic Cathedral for the third year running. He is the first Egyptian president ever to do so.

“We look up to God, for only faith can truly comfort us at a time like this,” said Menendez. “And in each other we find the strength to move forward.

“As long as I have a vote and a voice in the US Senate, I will be a bold advocate for tolerance and acceptance, for freedom of religion, peace, and security – both here at home and around the world.”

Menendez was joined by fellow senator Cory Booker (D-NJ), who offered his condolences in a recorded video.

“I am grateful the Coptic community lives those values of joy, of peace, of mercy, of compassion,” said Booker. “You evidence the values that are needed now more than ever to combat that kind of violence.”

“My prayer is that following this darkness and evil, the light of the Christian community in Egypt will burn brighter than ever before,” he wrote.

“I commit to you to work toward a more secure future for Christians in Egypt and in the region.”

Also joining the commemoration was Ambassador Ahmed Farouk of the Egyptian General Consulate in New York.

“In Egypt, that fact is that we are all Copts—whether we are Muslims or Christians,” said Farouk. “The 28 martyrs are in a better place than all of us, for sure.

“The only big loser is terrorism, and it will keep losing as long as we stand united.”

In his keynote address, Archbishop Karas reminded the audience that these martyrs cannot be remembered without also remembering other Christian and non-Christian victims of terrorism around the world.

But he impressed upon those in attendance that such witness is not only for those who are killed. It is meant also for the living.

“For most of us, martyrdom means we die to ourselves, and give our lives completely to God,” he said. “We honor Jesus Christ and the sacrifice of the 28 martyrs by taking up our cross, to follow our Lord.”

For complete video of the memorial service, please click here or watch below.