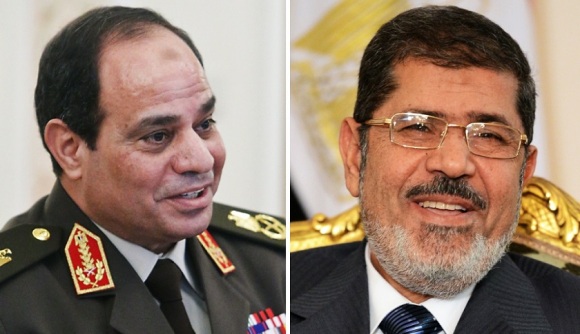 Very important but under-reported news in this article from al-Ahram Weekly:

Recent developments suggest the possibility of a thaw in relations between the state and political Islam. President Abdel-Fattah Al-Sisi recently met with three members of the Dissident Muslim Brothers, a breakaway group from the Muslim Brotherhood.

There is also a reconciliation initiative, proposed by Tarek Al-Bishri, between the government and the Muslim Brotherhood. The legal scholar, known to be close to the Islamist trend, hopes the initiatives will attract Saudi backing.

After describing recent incidents of terrorism, the article provides perspective from the former Brothers:

Speaking to the press following the meeting between Al-Sisi and Dissident Muslim Brothers, Tharwat Al-Kharbawi said those attending agreed that a reconciliation with the Muslim Brotherhood is unrealistic.

Al-Kharbawi described the three-hour meeting as “an extraordinary meeting with an extraordinary man …You can rest assured that Egypt is in good hands. But we all have to work together to ensure he is not left alone.”

In the background are discussions with Brotherhood members in detention:

Al-Zafrani (ex-MB) told the press that the statements of repentance issued by some detainees was discussed. He said Al-Sisi welcomed the recantations. He quoted the president as saying that the principle of revision, admission of mistakes and repentance is acceptable as long as those issuing the declarations have not committed criminal acts.

As for the reconciliation initiative, Bishry revealed it to a Turkish newspaper:

He also spoke of the January revolution, parliamentary elections and the importance of safeguarding the Egyptian state. “The continued existence of the state in Egypt is vital … we must preserve and perpetuate it through the participation of the people,” he said.

Al-Bishri argued that the ongoing conflict in Egypt is between three forces: the state and its backbone the army; Islamists and their grassroots organisations; and liberal elites who control the media. “The state, which is the strongest, should reach out to all,” he said.

Brotherhood dissidents dismiss Al-Bishry, finding him inclined to the Brotherhood above all.

After describing the long prison sentences given to many Brotherhood leaders, the article concludes with its analysis. The two sides are simply positioning:

In the confrontation between the state and political Islam, pressure is being sustained, on the one side, by long prison terms for Muslim Brotherhood leaders. On the other, there are bombings and violence being carried out by anti-state, pro-Islamist forces, considered by the state to be linked to the now-banned Muslim Brotherhood.

It is a game of nerves in which each side is seeking to strengthen its hand for whatever negotiations eventually ensue.

Certainly, Al-Sisi’s meetings with leaders from breakaway Muslim Brothers and reports that the new Saudi monarch is eager to settle the situation in Egypt suggest some form of social, if not political, reconciliation is increasingly likely.

Right or wrong in this conclusion, the article is worthy of consideration.