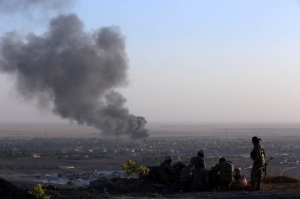 Many Christian religious leaders in the Middle East expressed great reserve against the US plan to strike at ISIS in Syria. But one particular Egyptian politician, a Christian, argues forcefully for it—including Egyptian participation. Now that the bombs have begun to fall, his words are also worthy of consideration.

“We should go, if only symbolically with a few planes,” said Ehab el-Kharrat, a founding member of the Egyptian Social Democratic Party. “We must not give a message to our local terrorists that we are backing off.”

Egyptian President Sisi has promised coordination with the US-led coalition, but has not contributed any forces. He recently stated Egypt is neither for Assad nor the opposition, though it does maintain membership in the Friends of Syria group organized early against the regime. Sisi has, however, compared the Islamist forces fighting in Syria to the Muslim Brotherhood, accused of coordinating ongoing attacks in Egypt.

Kharrat believes Egypt, and the international community in particular, should have been much more forceful, from an earlier date, but narrowly focused. He says many in his party agree, though it has taken no official stand.

“The decision not to arm the Free Syrian Army was a serious mistake and we must do so now as soon as possible,” he said. “Assad is not the answer, he is a cruel dictator, worse than Mubarak, similar to Saddam.”

Kharrat criticized the Muslim Brotherhood and Salafis for understanding the procedures of democracy, but not its philosophy – unless they reject it to begin with. But leaning on Assad, like some Christians are at least reluctantly willing to do, does not work either. It has produced the ills Christians are currently suffering.

“Autocratic regimes give ground to breed Muslim extremists like bacteria,” he said.

Bishop Muhib Younan of the Evangelical Lutheran Church in Jordan and the Holy Land agrees. “We have relied on secular autocrats who oppress others,” he said, “but must recognize also that democracy is a damaged concept.”

The trouble is that many Middle Eastern Christians, and certainly Egyptian Copts, feel trapped. Their experience with Islamists leads them to mistrust open democratic procedures that may bring them to power. But the secular states they have relied upon do not necessarily protect them beyond rhetoric.

Some in Egypt, such as Mina Fayek, a Cairo based blogger and activist, complain the Egyptian state has not yet rebuilt the churches attacked by Islamist mobs following the dispersal of the pro-Morsi Rabaa sit-in. The army promised it would be done; over a year later little work has progressed.

Others, such as Rami Kamel, a veteran Coptic activist, see both state and church inaction over the recent Gabl al-Tayr incident, where 22 Copts and three policemen were injured dispersing a sit-in protest over a missing woman believed to be kidnapped. “Sisi and the state will never go to the church,” he said, “because the church’s role has ended.”

But to imagine these sentiments as indicative of Coptic opinion would be greatly misconstrued. Christians are among Sisi’s greatest supporters.

If he follows through with his rhetoric, perhaps they should be. Commenting on the airstrikes in Iraq and Syria to the AP, Sisi said much more was necessary.

“The comprehensive strategy we’re talking about — part of it would be the security and military confrontation, correct, but it would also include fighting poverty,” he said. “We are also talking about improving education, which is important, as well as changes in the Islamic religious discourse.”

This coincides exactly with Kharrat’s opinion, though the second part awaits a demonstration of Sisi’s commitment.

“In Tunisia, Libya, Egypt, Syria, and all our states, the question of religion and politics must be resolved,” he said. “The only solution is a democratic and liberal system.”

As for Syria, Kharrat believes the practical only solution is to strike a deal with Assad to remove him from power, but assure him of non-prosecution, and the Allawites of non-persecution. Both Allawites and Christians must be incorporated into the new government, but only from outside the Baathist regime.

But the immediate task is to fight the Islamist rebels: ISIS, Nusra, and whoever else. Whether or not anyone else is left standing to take on Assad is a fair question, but not a few Christians, at least for now and however much they distrust America, are glad that ISIS is being hit.