About six weeks ago, we welcomed baby Alexander into our lives. According to Egyptian tradition, one week later we should have given him a Subuu3.

Subuu3 is related to the Arabic word for ‘week’, and the number three at the end represents an Arabic letter absent in English. We delayed his party, however, until his eighteenth day of life, until both sets of grandparents could arrive. But this is acceptable according to the local traditions, as Egyptians tend to be very, um, flexible, on matters of time. 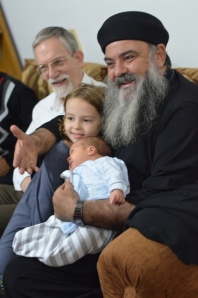 Our good friend, a Coptic Orthodox priest, Fr. Yuennis, traveled three hours one way from Upper Egypt to perform the religious rites of what is essentially a cultural baby party – received from the Pharaohs. We weren’t really sure what these rites included, though, until he was about fifteen minutes from our home.

My friend, who had already arrived, told me I needed to have a basin prepared for the priest to bathe Alexander in. I racked my brain, but couldn’t think of anything appropriate. Fortunately our neighbors upstairs had a foot bath which worked perfectly for the event.

I learned after the fact that we should have had a similar party the previous night where Alexander was also bathed. This time, all the guests would have thrown an Egyptian coin or two into the water, and the lucky woman who was chosen to bathe the baby would then collect that money. It is up to the family to choose, but the main criterion is that she is an older woman. My friend told me that for the Subuu3s done for her two children, the women took 100 and 150 Egyptian pounds (US $17 and $25) respectively. Not a bad fee for giving a baby a bath!

Instead, our party began with the arrival of the priest, who chanted prayers before taking Alexander from me to bathe him. The point is to bless the baby; it is not a baptism. In the Orthodox tradition boys are baptized forty days after birth, and girls eighty.

I have to admit that I was quite distracted during the priest’s words since we had about fifteen children, ages 3-9, holding lit candles and standing very close to each other and many other flammable items! Even when I took Alexander to get him ready for his bath, I was very conscious of the candles behind my back and prepared to catch on fire at any minute!

Later, when I asked my friend about the craziness of putting lit candles in young children’s hands, she just laughed and said this was a key part of the ceremony, and that, unlike our party, the children should have marched around the whole apartment holding the candles.

(Please click here to watch a video clip from the religious part of the ceremony. Translated subtitles are provided, though we are not yet able to translate the parts in Coptic. You may need to select ‘captions’ from the YouTube screen.)

After getting cleaned up and dressed in white, as is customary, Alexander got to experience the most stimulating part of the evening. First, he was put into a special bed made for the occasion. Then we put him and his bed on the floor and I stepped over him seven times, showing my authority over him as his Mother. Next he was taken by my friend and shaken a bit in his bed.

If that didn’t wake him enough, another friend took a mortar and pestle and made lots of noise right next to him. As it rang out, she chanted something like, “Listen to your mother, listen to your father, listen to your aunt, but don’t listen to your grandfather.” They will say several variations on this, always joking around by adding the “don’t listen to” part. When I asked the ‘why’ behind all this, I was told that it helps him not be afraid in the future when he hears a loud noise. Having been put through this ordeal, the rest of life should be much easier.

This is all followed by walking around the room in a circle with the noisemaker in his ear while the guests chant something like, “Lord, be with him and grow him; may he have the prettiest gold in his ear.” This is said regardless of gender, for some reason.

(Please click here to watch a video clip from the cultural part of the ceremony. While there is lots of chatter, no subtitles are necessary – just take in the hubbub.)

Once all this was done, it was time for the food. In general, Egyptians are very generous and great at hospitality, so we wanted to be sure we had more than enough food as well as a nice-looking spread. It probably wasn’t enough, but with a lot of help from the four grandparents, we mixed ready-made Egyptian favorites with American items. 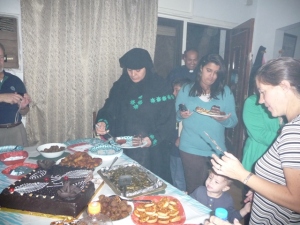 The final aspect of the traditional baby party is the party favor, also called a Subuu3, where we comically veered too much into American baby shower traditions. The Egyptian bag should be filled with peanuts, popcorn, and some hard candy, along with perhaps a baby-looking figurine or something similar and labeled with the baby’s name.  But our friends were enamored by the favors we gave out as they weren’t the least bit traditional.

In preparation for this party, my mom came with American items. Our bags were filled with a lollipop and a couple pieces of candy – all wrapped in blue, of course – then tied together with a miniature pacifier and a card bearing Alexander’s vital statistics: name, date of birth, weight, and length — information all our stateside friends expect to hear at the birth of a new baby. This was far too much detail for our Egyptian friends, though. They only include the baby’s name and a written blessing. This is what happens when you combine two cultures!

All in all it was a great night. Our Egyptian friends had a chance to meet Alexander and we were able to share in Egypt’s unique cultural traditions. Perhaps most importantly our child received a blessing, as did we, of an ever deeper sense of belonging.

Good job Julie! I am so glad that you were able to do this for your third child. I think my American sensibilities would have been overrun if they shook my baby like that. It would take every ounce of strength for me to not stop them from rocking him!

Thanks, Wendi. I was a little concerned, so I can only imagine how Julie let it go. It’s good she trusts her friend!