I was present at the Friday, May 13 million man demonstration in Tahrir Square. It has become commonplace for activists of all sorts to call for ‘million man’ demonstrations these days. While impressive in size, it was nowhere near the crowds assembled in Tahrir during the revolution. Rather, about one-third to one-quarter of the square was filled, which has been one of the largest gatherings since the revolutionary days.

Participation was fueled in two directions. In the works had been a solidarity demonstration in advance of May 15, the establishment of the state of Israel, which is called the nakba, or ‘catastrophe’, throughout the Arab world. Egypt has been excited with the newfound independence of its foreign policy, which is widely credited with urging the recent Fatah-Hamas reconciliation.

The other direction came after the horrible attacks on churches in Imbaba. These have been condemned by all sectors of Egyptian society, and many activists and political groups called for Friday to be an assertion of ‘national unity’, the catch phrase that declares Muslims and Christians in Egypt to be one people. It is, depending on perspective, a lofty goal, an essential fact, or an empty expression.

The main stage activities began with a Christian ‘church’ service, followed by Muslim Friday prayers, and a number of statements by religious, political, and activist leaders. I put church in quotes, unpleasantly mindful of the sarcasm, but recognizing the difficulty of the speakers. Apparently representing evangelical traditions, though with one Orthodox priest speaking prominently, their time consisted of efforts to connect with the crowd through chants that mostly fell flat, praise hymns that no one recognized, and assertions of national unity and Palestinian solidarity against Israeli oppression.

Most Arab Christians recognize the Palestinian people as having legitimate rights, and the Israeli government of having oppressed the occupied territories. Yet to an overwhelmingly Muslim audience, significantly representing Islamist groups such as the Muslim Brotherhood and al-Jama’a al-Islamiya, it appeared their main objective was to present their credentials as Palestine supporters. Little was spoken that could be understood as Christian-particular, though one speaker did urge those present to remember the cause for justice must be joined by truth and love.

Contrast their effort with Islamic Friday prayers, which was a masterful performance by the speakers. Islamic to the core, they wowed the audience, weaving assertions of national unity and Palestinian solidarity with cries to continue the revolution and purge the remnants of the Mubarak regime from the nation. The official Friday prayer speaker called for a civil state, and brought many in the audience to tears as he implored God to protect the revolution, save it from religious division, and spread it to other Arab states.

The next speaker represented the Salafi perspective, which equally condemned the Imbaba attacks and promoted national unity. There was little that would represent any of the recent controversial Salafi statements, such as opposition to democracy or the eventual return of the caliphate. There was much anti-Israel rhetoric, however, calling for millions of Egyptians, Muslims and Christians, to pray in their holy sites in Palestine, proclaiming Jerusalem to be their capital alone.

Other speakers continued on the same lines as those above, and I have little argument with either cause, inasmuch as Egyptians have the right to express these perspectives. Two disconcerting trends emerged, however.

First, it seemed that national unity was being built upon the back of a common enemy. Yes, Muslims and Christians can come together to condemn Israel, but will this solve the real domestic, if sometimes exaggerated, issues that produce sectarian conflict? Furthermore, speakers adopted the ‘national unity as fact’ perspective, blaming all problems on ‘the remnants of the NDP and security forces’ for instigating chaos in counter-revolution. There may well be manipulating forces at play in Imbaba and elsewhere; the proclamation of the truth in this conspiracy only masks over real tension. Yet it was not just lingering Mubarak cronies who are to blame; these, it was said, were working, as before, at the behest of Israel and the United States.

Yes, it would seem Israel would benefit from a divided, weakened Egypt. Yes, Israel has manipulated sectarian tension previously, at least within its own borders.[1] Is there evidence of it here in Egypt? I have seen little, but this is the nature of conspiracy. It may well be true, but it is believed as mantra. In the end, it does no good, since it closes the mind and turns a blind eye to one’s own faults.

Second, flowing from this, there was a distinct lack of civility in discussing the issues. Perhaps it is the nature of politics, populist politics in particular. While the speakers generally did not use incendiary words, the chanters from the stage led reprehensible, inflammatory cadence. ‘We demand expulsion of the ambassador of pigs.’ ‘We are going to Tel Aviv as a million martyrs.’ Though not everywhere or fully representative of the crowd, Israeli flags were burned, and an effigy was hung.

There was also the presence of a green headband-wearing ‘Army of Muhammad’. These proclaimed the eventual formation of an Islamic army that would liberate Palestine. In conversation with one adherent, he made several nuances that delay quick rejection. First, the Arab Spring has taught us that we can have a peaceful army. We will march to Israel, though there will be bloodshed wrought against us. Second, Palestinians are strong enough to win liberation on their own. We must support them by becoming strong ourselves, so as to pressure Israel, not to attack it. Third, we are a distinctive Islamic army, remembering the great Islamic victory over the Jews in Medina. But we will march side-by-side with our Christian brothers in support of this cause.

In this youth there was civility, and it showed in his discussions with Christian protestors who engaged him about the issues of Egypt and national unity. Though both sides championed the same phrase, there was deep division in understanding the problems at hand. One wanted an Islamic state which would protect Christians, the other wanted a civil state which would protect Christians, and others. They could not come together on essentials, but they departed friendly, after giving ear to the explanations of the other.

Perhaps this encounter should give me pause in my uneasiness. The rhetoric of the day was both lofty and base. One worthy cause was emptied of depth; the other was adorned with contempt for an enemy. Yet the people involved – even from extreme interpretations – discussed. There was no violence, no aggression, only the inflammation of public words. This gave me much pause, and interestingly, the Christians were not very good at it (though the Orthodox priest was better). Yet in personal conduct, even with those of completely opposite persuasion, there was peaceful exchange.

If only such exchanges might be had more often – between Muslims and Christians, even with Zionists. Alas, people do not often talk about that which divides them. An event such as this, as uncomfortable as it was to my Western Christian sensibilities, at least gets people talking, and puts them in one arena so as to discuss together. May all have the bravery to stay there, and keep alive the dialogue. 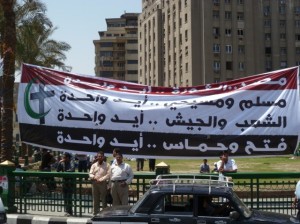 the Palestinian flag, carried through the crowd

an Orthodox priest addressing the crowd 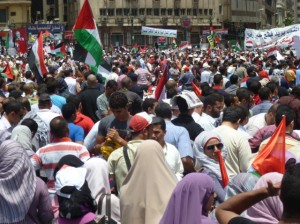 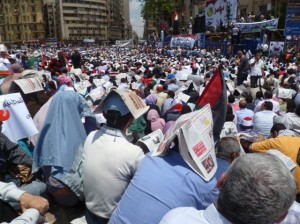 sitting to listen to the Friday sermon in the heat of midday sun; my neighbor shared his newspaper with me, and several others 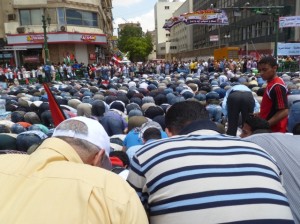 prostrating during Friday prayers; see some standing away from the crowd; among them, I was asked to politely sit

cheering for Palestine during the speech of a popular Salafi preacher

a side stage rally for Palestine, with a Christian to the left and an ‘Army of Muhammad’ Muslim to the right 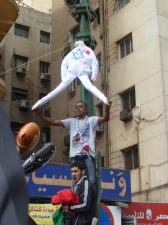 an effigy of the State of Israel

burning and stomping on the Israeli flag

the ‘Army of Muhammad’ supporter described in the text… 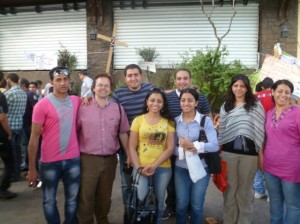 … and 2nd and 3rd from the left are the two Christians who discussed national unity with him
(note: this last picture was taken from a visit to Maspiro, I hope to post a second text on the attacks tomorrow)

[1] See ‘The Body and the Blood’, Charles Sennot, formerly a journalist for the Boston Globe, for examples he has documented.

One reply on “Thoughts and Photos from Friday Protest: National Unity and Palestinian Solidarity”

Interesting article and pretty useful info you have here.