Three weekends ago we traveled to the village of Qalzam with a friend of ours from Cairo, whose uncle still lives a traditional, agricultural life. The village was about a twenty minute drive from Shabin al-Qanater, the capital city of the Qalubiya governorate, which is in the Delta region about an hour north of Cairo. Qulzam means ‘fertile ground’ in Coptic, and was the place of his relative’s home and the area church, Archangel Michael. The church was built 250 years ago on the site where the angel appeared to a Christian villager. In those days the area was 75% Christian in composition, but their population has dwindled to only five families today. Over time, most of the families have relocated to Cairo for better work. Nevertheless, there is still significant Christian representation in the area, and during the Friday morning service we attended there appeared to be over 100 people in attendance, perhaps buttressed by a funeral service that coincided with our visit.

The church building itself was not 250 years old, but has been rebuilt recently, though it is not quite finished.

It is a monumental structure, complete with a balcony, but the church is still awaiting donations to paint the icons on the wall dividing the people from the altar.

My friend asked if I would be willing to help the church solicit. It uses its finances currently to conduct a shuttle service helping the Christians from surrounding villages to get to the church. It also gives the children small toys to encourage them to attend the Sunday school. These lessons follow the main mass, and we participated with them.

While Julie took Emma into the younger class where they chanted Arabic hymns and taught the kids to pray making the sign of the cross, I was with Hannah in what I discovered later was the combined class of all older ages. These are usually kept separate, which was a relief to hear, since it was quite chaotic, with few paying attention and much chatter throughout the lesson. I entered late, as I was talking with the ‘college and career’ folk after the mass, only later finding out that they had a class as well. When I entered they were chanting an Arabic hymn, but then to my surprise they sang a popular Arabic praise song, albeit without any instrumentation. They then tried to show a film on the recently obtained screen, which was the very reason every class met together, but sound quality was so poor they abandoned the effort after a few minutes. Then followed a lesson given on powerpoint, which seemed well designed but was way over the heads of the younger kids, and failed to attract the interest of the older ones. I felt sympathy for the teachers.

I spoke afterwards with a younger woman who was in charge of the older Sunday school class, but was not the teacher. She serves as Sunday school supervisor for the whole diocese, traveling especially to make certain that Christian daycare centers are well run. Yet Archangel Michael is her home church, and she recruits from the ‘college and career’ to teach the Sunday school classes. I was accompanied most of the visit by the one in charge of the middle school class, who works as a middle school science teacher another village over. He walks to work about a kilometer and a half every day, which is cumbersome only during the winter rains when the dirt roads get muddy.

In describing my work to them, the supervisor mentioned the travails of the Christian community in the regional capital, Shabin al-Qanater, in building a church. While relations with the Muslims are fine and official permission is granted for its construction, she claims that the local security forces are preventing the building from beginning. She asked if it was in our capability to investigate. While I was not certain, I reiterated that our group does not intervene for the sake of Christian church building, but we are interested in getting at the whole story from all sides, and my work in particular was towards the aim of building peace in an area. The presence of a foreigner in such a setting, I added, could easily over-encourage some (zealous Christians who think that their story will be told abroad and pressure put on the government) and infuriate others (zealous Muslims who could retaliate if they believe Christians are going outside the system to get help). So I put the request on hold, given also that she had to leave for other responsibilities, preventing further exploration of her story. Following on her comment that she visits Cairo with some regularity, though, I told her to contact me next time through and we would sit with a recorder to get all the details, and then decide from there what was best to do.

The rest of the day was spent at the old-style villa of my friend’s family, which was twelve rooms large in sprawling design incorporating much open veranda space. 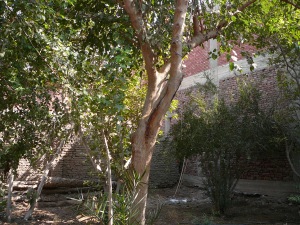 Though it was in need of repair in some places, it was elegant and comfortable, full of antiques over 100 years old. 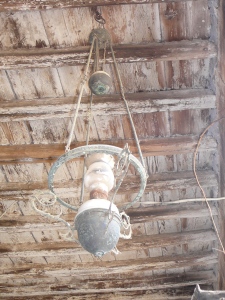 The only person who lived there, though, was his uncle, a young man by appearance but who was a former army officer, and thereafter lived 24 years in Baghdad, owning a restaurant and a few other shops. He lost everything, including his family, due to the First Gulf War, and returned home to Qalzam, where he takes care of his family house, enjoying the quiet life in the countryside, involved also in the church to which he often opens his home. His sustenance comes from the farmland he owns, which he hires others to work for him. There were several relatives and neighbors with us throughout the day, both Muslim and Christian, and he treated us to a traditional barbeque and fatayer meal. The meat was cooked over an ancient grill,

and the fatayer—thin bread folded many times over, each layer coated in butter and honey (click here for video)—was cooked in an oven that seemed right out of the Great Depression.

Save for the washing machine and television, the whole house was as it was constructed over 150 years ago. While much of the village has been remodeled and built up with modern construction methods, it was very comfortable to enjoy life as it has been lived unchanged for generations. Except, of course, that soon after eating and after Emma declined a chance to ride on a neighbor’s donkey, we instead mounted the car and drove back to modernity.

The trip was our first outside of Cairo, and it was enlightening to witness life in a traditional setting. Our lives in Maadi are very insulated, and we will do well to continue to travel domestically as much as possible. 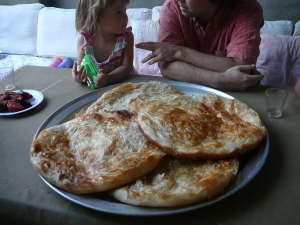 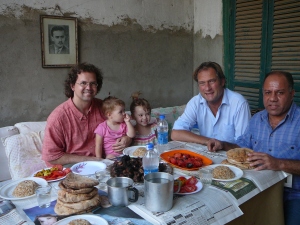 To close this post, allow me to say that my sentence about soliciting is sincere; should anyone be interested please contact us and we can discuss it. Yet at the same time, my friend told me that the priest of the church has increased in wealth since he began serving at the church. While this was not labeled as fraud, according to my friend church policy allows the priest to take a percentage of the gifts for his personal use, and other people have given him property directly. Personally, though I shook his hand, I did not speak with him, and at the request of my friend I put a donation in the box. The services of the church seemed very sincere, however, as did the volunteers with whom I spoke. Please do not understand this paragraph as my request for you to give, but in relaying the story and circumstances, I hope you get a small snapshot of local life.