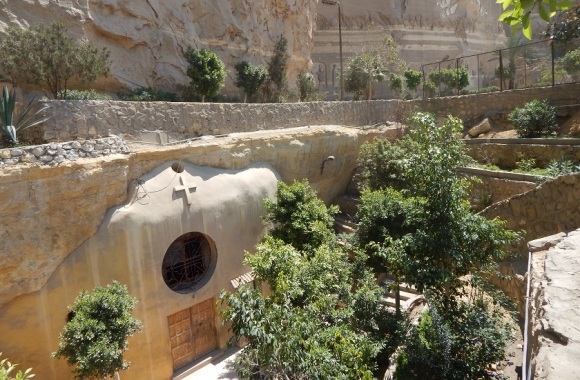 From my new article for Christianity Today’s Behemoth publication:

The Pyramids of Giza used to be in the middle of the desert. Eventually Cairo’s urban sprawl pushed right up to the Sphinx. The Citadel of Saladin towers over the city. The southern approach requires an overpass straddling the City of the Dead. In Tahrir Square, the Egyptian Museum and its famed mummies were overrun with the bedlam of a revolution.

Tourism has dropped dramatically since then, but intrepid travelers can hardly help notice the encroachment of squalor on the glories of antiquity.

What most miss is the reversal: A glory rising out of the garbage. To create it, 40 years ago one man had to literally trudge through a pigsty. Today it is simpler to reach the massive cave church complex in the Muqattam Mountains on the eastern edge of Cairo. But the journey still requires a pungent assault on the senses.

Women and children pick through 15,000 tons of the city’s collected refuse, sorting out recyclable waste from the biodegradables useful for wandering livestock. Men haul burlap trash bags twice their size into garbage trucks poised to tip from overfill…

The article tells the story of how a Coptic Orthodox priest inhabited this world and gave birth to one of Egypt’s most beautiful sites.

Please click here to read the full article and see the photos at The Behemoth.