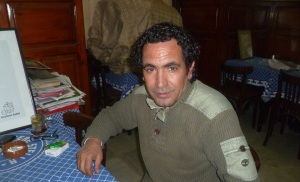 From my recent article at Arab West Report, continuing a series on the formation of Egypt’s constitution:

By self-description, Mus’ad Abū al-Fajr really wasn’t that important. In almost every categorization he was in the minority. But he also counts himself a ‘son of the revolution’ and fully worthy. And as a Bedouin, his participation in Egypt’s constitutional Committee of Fifty was itself one of its greatest accomplishments.

Selected as a ‘general personality’ independent of any institution, Abū al-Fajr isn’t sure why he was chosen. But he is confident it is linked to his status as a revolutionary from Sinai, active in protest in public squares since 2004. From 2007-2010 he was jailed on charges of ‘inciting riots’, and was released only a few months before the January 25 revolution. He immediately joined in on the National Movement for Change, found himself active in Tahrir Square, eventually became part of the National Salvation Front, and then worked on behalf of Tamarod to depose Muhammad Mursī.

But there were many revolutionary candidates to choose from for inclusion in the Committee of Fifty, so it was his status as a Bedouin that stood out. Therefore from the moment of his inclusion Abū al-Fajr considered that the region of Sinai was going to win at least a minimum of its rights. He knew that if he would withdraw from the committee – along with Hajāj Udūl of Nubia, with whom he cooperated extensively – it would cost the project much credibility and the symbolic vote of their regions. The task, then, was to achieve more, not just for the Sinai but for the people, for whom Abū Fajr described himself as continually defending.

Here is the gain:

His primary achievement, Article 236, represented the minimum. Treating Sinai along with the underdeveloped border areas of Nubia, Matrouh, and Upper Egypt, it promises a ‘comprehensive economic and urban development’ with ‘participation of the residents’. These are promised the ‘priority in benefiting from them’ in a manner that takes into account ‘the cultural and environmental patterns’ of each area. Ten years is given as the limit, with the law to spell out the particulars.

And here is why it wasn’t more:

But in fact, Sinai was to be mentioned more frequently. It was to be in the preamble, in the articles on cultural diversity, and those preventing discrimination based on geography. It was not the writing committee that played the chief role in removing it, he says, but direct pressure from the military seeking support for its own controversial article.

Abū al-Fajr described this as Article 204 on the military trial of civilians. He says he could have achieved more for Sinai had he simply agreed to it. He judges this from his experience in the work and discussions of the committee, but stood against it nonetheless. Besides himself, only five others voted to reject the article in the end.

Most of those interviewed described a few setbacks here and there, but were very positive about the document as a whole. Abul Fagr’s reaction is unique:

And the end result is a constitution he is happy with, recognizes a few flaws, but yet does not consider a revolutionary document, and is ultimately not worthy of Egypt. He does not even believe it will last.